Developed in the 1920s, Brentwood was created to offer affordable homes similar to those available in more affluent neighborhoods. Thanks to Federal aid programs, many families were able to purchase land in this area and build small comfortable homes after World War II.

Brentwood Historic District Phoenix AZ lies loosely between McDowell Rd, the 202 freeway, 16th Street and the 51 freeway. It is comprised of six original subdivisions with building occurring on and off from 1915 to the 1940’s. Below we’ll take a look at the history of what is now called Brentwood Historic District and end with our take of the present condition of the neighborhood.

The economic issues surrounding the Great Depression took their toll on both existing and future home building with the next development stage, Write Davis subdivision, coming onboard in 1938. The final phase happened after WWII with development in the eastern boundary, Valley of the Sun Subdivision in 1944 and some western development in the Governor Hunt subdivision.

The early homes represent a variety of Period Revival style homes. As you drive down Willetta you will see fine examples of Tudor, English Cottage, Spanish Colonial and Bungalow style homes. Later builds reflect the movement to the newly popular ranch style homes of the late 30’s and 40’s.

An interesting point for Brentwood’s development occurred during World War II. Building supplies were largely limited during the War. Developers in several Valley subdivisions, including some in Brentwood, were granted access to home building materials to create housing for many war based businesses such as the Goodyear Aircraft, Alcoa and the newly created military bases. City records show some 58 homes were built in the Brentwood area during the war years.

We classify Brentwood Historic District as an up and coming neighborhood. Since it lies outside the downtown corridor, 7th Street to 7th Avenue, it lacks easy access to light rail and the pedestrian lifestyle many look for in an urban neighborhood. Thus, it is still finding its market and sense of community.

The number of good, affordable period revival homes is a huge help to the neighborhood and we are seeing strong interest in homes on Willetta and Brill. We feel that the homes on Culver are downwardly affected by proximity to the 202 freeway.

Many ask about the Church that sits near the middle of Brentwood Historic. The church was constructed in 1947-49 by the Church of Jesus Christ of Latter Day Saints and served as the First Ward of the Phoenix Stake until 1978 when it was sold to Church of God in Christ. It is not used for daily activity these days.

If you are looking for an affordable period revival style home, Brentwood Historic may be just what you want. Homes here are priced well below similar sized houses in its neighbor district to the NW, Coronado Historic, and offers more distinctive homes and larger lots than nearby Garfield.

What is for Sale in Brentwood Historic District?

Below is a list of the homes currently on the market in the Brentwood neighborhood. The list is updated daily to ensure you get quality info. If you’d like to see a home here or anywhere else in the downtown region, let us know. We are downtown Phoenix real estate specialists. 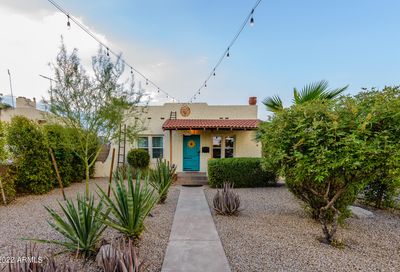